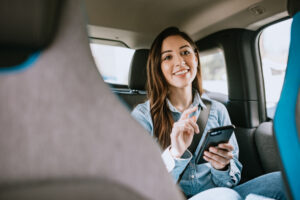 When Caitlin Donovan, global head of Uber Health, worked at home care company CareCentrix, she encountered a patient who declined to have a seven-day follow-up appointment. He said his daughter had been in the hospital with him all week and he could not have her take off another day of work to get him to the appointment.

“He was risking his own health so that his daughter could stay in her job,” Donovan said. “Now imagine that from the daughter’s perspective. She had to choose between keeping her father healthy and work.”

Now, San-Francisco-based Uber Health aims to fix that dilemma by working with self-insured employers. Donovan made this announcement Monday at the HLTH conference in Las Vegas.

Employers will have a benefit administrator who analyzes claims data of their workers. The benefit administrators will proactively reach out if they notice that an employee needs services, and schedule a doctor’s appointment along with a ride to get there. Users can access Uber Health through the app, by text or by phone call, Donovan said.

“That benefit administrator knows [a patient needs help] because there’s been a lack of claims data for that patient or there have been too many claims at the ED and proactively reaches out saying, ‘Do you know you have this benefit? Would you like to use it? Let me schedule you a primary care appointment, your mammogram,’ whatever that preventive screening is, with an Uber ride to get there,” Donovan said in an interview.

The service not only helps those who need the care themselves, but caregivers as well. With 43% of adults being caregivers, it’s vital to also provide assistance to that population, Donovan stressed.

“It is really stressful caring for an aging parent … you have to think about the critical things like getting them to their doctor’s appointments, but also are they happy, can they see their friends, can they go to church, the grocery store, get a haircut,” she said.

Uber Health already provides this solution to Medicaid and Medicare Advantage beneficiaries, but saw the need for employers as well, Donovan stated.

“When we really dug into the data, we saw that employers face some of the same issues and the same underlying social determinants of health factors that you see in a traditional Medicaid/Medicare population,” she said. “So thinking about the programs we run for those populations … I think it applies really well to a self-insured employer.”