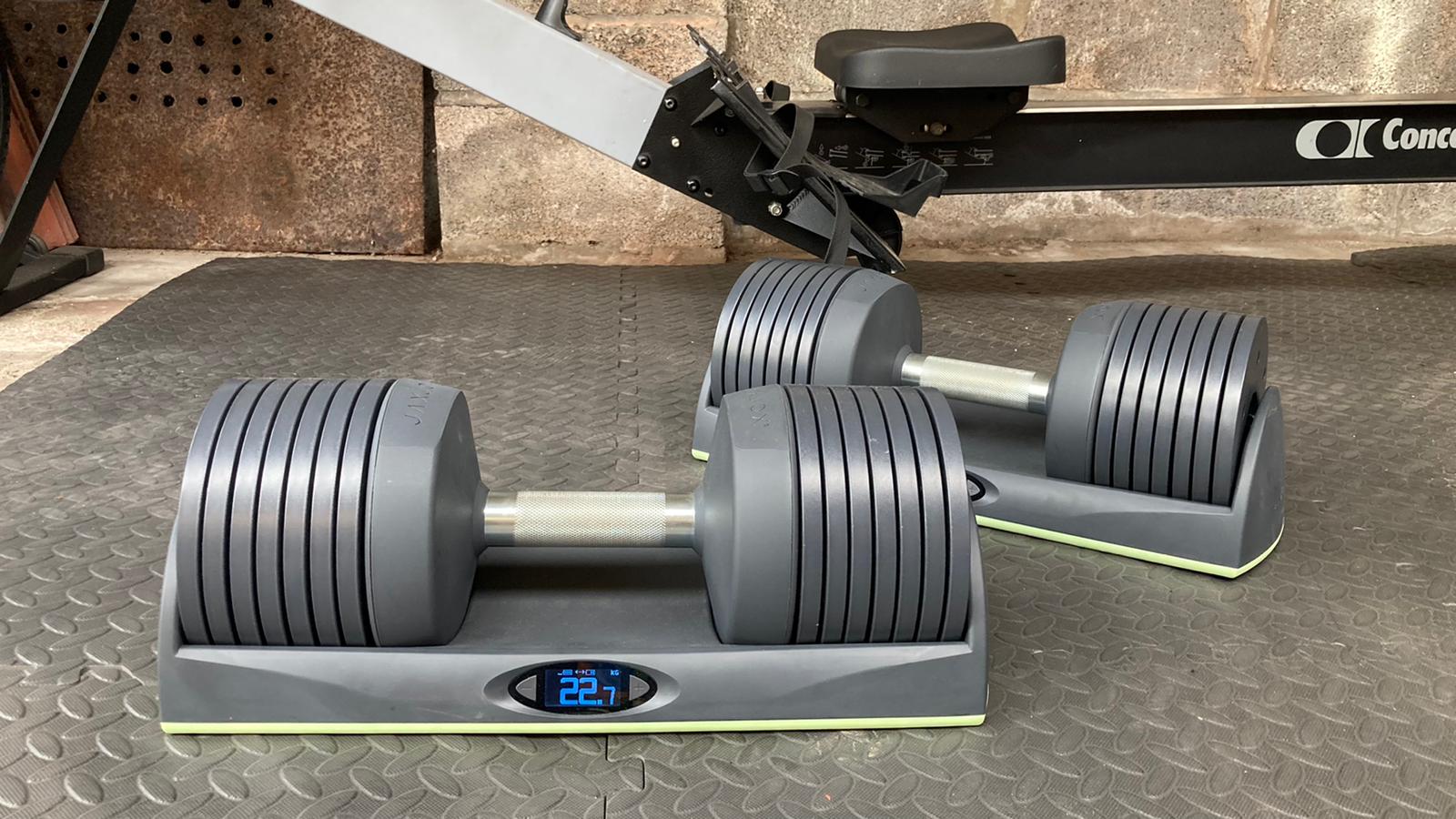 While the headline reduction is £200 (and reviews on our sister sites confirm the RRP of £499.99) they are currently listed at £390 on Argos – the brand’s go-to UK stockist, linked to from their website – so we’ll say you’re saving £90. However, the key detail is that they’re now cheaper than buying two Bowflex adjustable dumbbells.

Both the JAXJOX and Bowflex adjustable dumbbells have earned a place in our round-up of the best dumbbells, but I’ve used both sets and think the JAXJOX set has several distinct advantages over their (now slightly pricier) rivals.

The first key difference is the weight-changing mechanism. The Bowflex set uses a dial on either end which you twist to change load. The JAXJOX pair, meanwhile, use digital docking stations with up and down buttons to change their weight.

Both are easier than changing the plates on clunky spin-lock sets, however, because you have to change dials on both ends of the Bowflex set, I think JAXJOX has the easier method. It also avoids the possibility of loading the dumbbells unevenly, which I admit has happened to me on a couple of occasions while using the Bowflex set.

But what really swings it for the JAXJOX is the design. The Bowflex can be quite clunky and the plates have a wide diameter which would, on occasion, knock me during exercises like biceps curls. The plates feel secure, but they do move a bit when lifted and the plastic coating gives them a cheaper overall feel.

The JAXJOX set, on the other hand, have a sleek, matte-grey metal finish. The plates are slimmer and not as wide, making them easier to wield. The plates also have built-in grooves designed to fit snugly together so you don’t get any unwanted movement or rattling.

The central handle on the JAXJOX has medium knurling for great grip. Plastic buffers on either end also mean, unlike the Bowflex, they are held comfortably in a goblet position or for movements like triceps extensions.

The JAXJOX DumbbellConnect have eight weight options from 3.6kg to 22.6kg. The Bowflex SelectTech 552s trump this with a range of 2-24kg, and they also offer 15 different loads. If you’re looking to make incremental gains or use these weights for lighter accessory movements like lateral raises, you may want to opt for the Bowflex offering.

Or, if you like to lift heavy, the Bowflex dumbbells are also available in a heavier 4.5kg-41 kg option (opens in new tab), although the price increases in line with the higher maximum load.

The other advantage the SelectTechs have over the DumbbellConnects is that they don’t rely on electricity. The JAXJOX docking stations need to be charged up to work and while the battery life is five days, it is frustrating if you forget to charge them (happens to the best of us) and are left unable to change the weight. The Bowflex set, on the other hand, is mechanical, making them a good option for garage gyms where you might not have access to a mains socket.

Should You Buy The JAXJOX DumbbellConnect Or Bowflex SelectTech 552?

Both pairs have their advantages but I feel the JAXJOX pair are the better option. The compact design looks and feels better than the Bowflex SelectTech 552s, and I found them more manoeuvrable and secure. The shape is also more practical for bodybuilding-style movements like the dumbbell bench press, dumbbell pull-over and goblet squat, making them a great option for strength training at home. Saving £60 doesn’t hurt either.